Why God Rested and You Should Too

For years I’ve listened to messages that evoke the Sabbath as the primary reason we are called to leave margin and allow for rest in our weekly and yearly rhythms. These messages often cite the latest findings in psychology or human anatomy as evidence to drive home their point: humans need rest.

But what if the Sabbath as described in the Bible is actually meant to remind us of something more profound than just rest and relaxation?

The first time the idea of “rest” is explored in the Bible is actually within the first two chapters. It’s a story with which you’re likely familiar. On the seventh day of Creation, after ordering the universe and preparing a world where humans could flourish, God rests (Gen. 2:2).

For us today, these words conjure up an image of God somehow wiping the sweat from His brow, plopping down in a chair, and putting His feet up. As if somehow God could be exhausted after a long (six) days of work.

The World as God’s Temple

The ancient reader would have seen something much different. To understand what’s actually happening as God ‘rests’ we must first look at the story as a whole. The Creation Narrative takes place over a period of seven days. For the first six days, God is transforming a chaotic wilderness into an ordered system perfectly designed for humans to flourish. After each of the six days, God declares that His work is good. And we read the common refrain, “And there was evening and there was morning on the… day.”

To the ancient reader, seven days was a highly symbolic period. In Israel, when a new king came to power or when a new Temple was built, there would be a seven-day dedication ceremony. This period of time marked the important transition between the Temple being created and set up, to the point where it was actually being used for the purpose it was designed for.

You could think of this as similar to the inauguration period for a new president. The new president is voted in, but then there is a period of time where they prepare to actually take up the office. Only when they move into the White House and are inaugurated does their rule as president begin. They are allowed to ‘rest.’

In the story of Genesis 1, the author is using this symbolic seven day period to compare the entire world to God’s Temple. The entire world, the author proposes, is the place where God’s presence dwells. Psalm 139:7-9 reads, “Where can I go from your Spirit? // Where can I flee from your presence? // If I go up to the heavens, you are there; // if I make my bed in the depths, you are there.”

There is no place on this earth we can go to be apart from God’s presence. And the seven day period of Genesis is reminding us that God created the entire world and is thus dwelling in and ruling over it all.

The Significance of The Sabbath

There’s no doubt humans need rest. We need a break every now and then to recharge and re-energize. But the biblical picture of Sabbath is about much more than just encouragement to put your feet up and relax.

The practice of Sabbath is actually first found in Exodus 16 as the Israelites wander through the wilderness after God rescues them from slavery in Egypt. God miraculously provides manna for them to eat each morning, but tells the people to only collect what they need for each day. On the sixth day, they are allowed to collect a double-portion because “Tomorrow is a day of rest, a holy Sabbath to the LORD” (Exod. 16:23).

Here we find the theme of Sabbath directly connected to the imagery from the seven-day period of Creation in Genesis 1. God gives the Israelites a practical reminder of God’s rest. The people are not to store up for themselves more than they need, but rather rely on God to provide for them as He promised He would do.

The Sabbath is not just a day off, it’s a day to remember all that God has done for them and all that God promises to continue to do. God is the one in control, not the people.

God gave the Sabbath as a gift to the Israelites, a means of breaking up their routine and forcing them to remember their dependence on God.

The heart of the Sabbath is about a breakup of our routine, which is exactly what happens when we leave our normal workweek to come and worship God together as The Church each Sunday. Instead of taking Sundays for granted as just a relaxing day off, we ought to use this time as a reminder that God is the one in control of our lives.

We are dependent upon God for all that we have, and the moment we fall into the temptation to believe it’s us at the helm, we are in danger. We’re in danger of thinking the world revolves around us or that the world might stop revolving all together if we don’t do more or produce more. Sabbath is not about rest in terms of relaxation. It’s about rest from the many ways we attempt to subvert God as the ruler of our lives. It’s a time to remember whose we are and let go of the constant pull to do it all ourselves, by our own strength alone.

So, as you look to receive the gift of the Sabbath in your own life, remember the reason God rested. Not so that He could have a much-needed day off, but so He could take up the reins of the world and begin His rule.

God is still ruling over the world, and your life, today just like He was yesterday and will be again tomorrow.

May you remember this as you begin a practice of Sabbath in your life on your quest to find true rest. Amen. 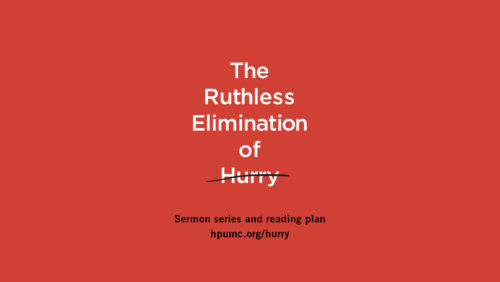 Dive into "The Ruthless Elimination of Hurry"

In ​“The Ruthless Elimination of Hurry,” John Mark Comer provides some fantastic ideas for how you can take part in the Sabbath for you and your family. Not sure where to start? Visit hpumc​.org/​hurry to learn more about where you can get the book or download the companion guide for more information about practicing the Sabbath.